Disney Channel’s Original Movie Based On The #1 Animated

PHINEAS AND FERB THE MOVIE:

ACROSS THE 2nd DIMENSION 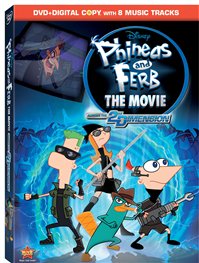 This “Ultimate Fan Pack” Includes A DVD + Digital Copy Of The Movie,

Families can bring home Disney Channel’s original movie, Phineas & Ferb the Movie: Across the 2nd Dimension, in the 2-Disc “Ultimate Fan Pack” DVD Set on August 23, 2011. Based on Disney Channel’s #1 animated hit comedy series among Tweens 9-14 for three years running, this epic release comes packaged with a DVD of the movie, a digital copy of the movie with eight digital music tracks, all new bonus features and an awesome do-it-yourself Platypult Kit – all for the suggested retail price of $26.99 in the U.S. and $29.99 in Canada.

This special 2-Disc “Ultimate Fan Pack” also includes a variety of cool bonus features (i.e., eight deleted scenes, a music video, an exclusive song, a sing-along “Perry-oke” feature, and a bonus episode). The Digital Copy lets viewers transfer the movie and the eight digital music tracks onto their laptop and/or portable devices of choice – to watch the movie or listen to songs anytime, anywhere and at the touch of a button. The Ultimate Fan Pack is the perfect gift for teens and/or families on-the-go!

Phineas and Ferb The Movie: Across The 2nd Dimension features Disney Channel's dynamic animated duo, Phineas Flynn and his stepbrother Ferb Fletcher, as they go on their biggest adventure yet. When the boys discover that their pet platypus Perry is in fact a secret agent who battles the forces of evil daily, they join him on a grand adventure that blasts them to another dimension where a truly evil Dr. Doofenshmirtz has taken over an alternate Tri-state Area. This larger than life, action-packed adventure will have the entire family laughing out loud!

Phineas and Ferb The Movie: Across The 2nd Dimension was co-created and executive produced by Emmy® Award-winner Dan Povenmire (Director for TV’s “Family Guy”; Director/Writer for “SpongeBob SquarePants”) and Jeff “Swampy” Marsh (Writer/Director for TV’s “Rocko’s Modern Life”; Artist for “The Simpsons” and “King of the Hill”).

Created by Emmy Award-winning Dan Povenmire and Jeff "Swampy" Marsh, this stand-out comedy series follows Phineas Flynn and his stepbrother, Ferb Fletcher, as they set out to optimize every day of their 104-day summer vacation, dreaming the impossible dream — and then doing it, including building a rollercoaster or a beach in their own backyard. Unbeknownst to them, their pet platypus Perry has a double life as suave secret Agent P, deftly battling the evil Dr. Doofenshmirtz to save the world. Meanwhile, older sister Candace is aghast at her brothers' antics and makes it her life's work to tattle on them to Mom and Dad, though somehow she can never seem to catch them red-handed.

Renowned for its sophisticated and good-natured humor, clever songs and noteworthy guest stars, "Phineas and Ferb" is a fan favorite in every major territory. It airs on Disney Channels and Disney XD channels in more than 168 countries and in 34 languages, reaching more than 279 million unduplicated Total Viewers worldwide.