Scanlon says the cast was able to bring the story to life with great ingenuity and enthusiasm. "Working with this group of actors was an extraordinary experience. They each brought a unique level of humor, emotion and creativity to their work that not only complemented their individual performances, but made the overall story come together in a really wonderful way."

The voice cast includes the following: 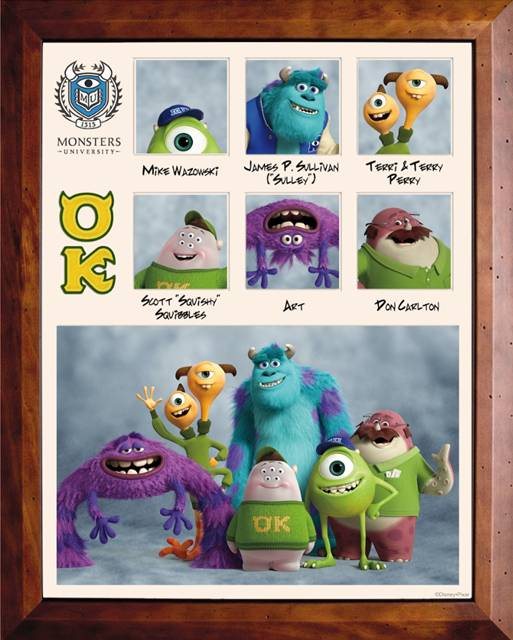 ·         Steve Buscemi ("Boardwalk Empire") rejoins the monster world as Randy Boggs, a Monsters University freshman who is ready to experience all that college has to offer (if only he can curb his habit of disappearing).

·         Dave Foley (TV's "NewsRadio," "The Kids in the Hall") as Terry Perry, the skeptical half of a bickering two-headed monster and dedicated Oozma Kappa (OK) brother.

·         Sean P. Hayes ("The Three Stooges," TV's "Up All Night") gives voice to Terri Perry, the more sensitive side of a two-headed Oozma Kappa (OK) fraternity brother with Scaring aspirations.

·         Joel Murray (TV's "Mad Men," "Two and a Half Men") voices Don Carlton, a "mature" student at Monsters University and a founding member of the Oozma Kappa (OK) fraternity.

·         Charlie Day ("Horrible Bosses," "Pacific Rim," TV's "It's Always Sunny in Philadelphia") provides the voice of the incomparable Art, an Oozma Kappa (OK) fraternity brother with a questionable past.

·         Nathan Fillion ("Much Ado About Nothing," "Percy Jackson: Sea of Monsters," TV's "Castle") portrays Johnny Worthington, the confident president of Roar Omega Roar (ROR), a Monsters University fraternity that prides itself on its notable Scarers.

·         Aubrey Plaza ("To Do List," TV's "Parks and Recreation") gives voice to Claire Wheeler, the somber president of Monsters University's Greek Council and emcee for the annual Scare Games.

·         John Ratzenberger ("Cheers," Disney•Pixar's feature films) returns to the Pixar recording studio as the voice of a Monsters, Inc. employee.