"Phineas and
Ferb" Powers Up with New TV Movie on

And Disney Parks and
Resorts Experience

The
popular chattering character, Perry the Platypus, of Disney Channel's Emmy
Award-winning "Phineas and Ferb," meets the distinctive, 27-foot rounded
aluminum body of a customized Airstream trailer when Disney launches the "Perry
the Platy-bus On Tour," originating MONDAY, JULY 11 in New York
City. Outfitted stem-to-stern as Phineas' and Ferb's teal-colored pet platypus,
Perry the Platy-bus will explore the adventures of the road on a coast-to-coast
journey to San Diego's Comic-Con International (July 21-24) and then slips
through the wind, all the way to the Disney D23 Expo in Anaheim (August 19-21).

The
summer of news for "Phineas and Ferb" (TV's #1 animated series among Tweens
for the past three years), includes new episodes, new "Take Two with
Phineas and Ferb" talk show guests — including David Beckham, Selena
Gomez, Larry King, Howie Mandel, Jason Segel and Shawn White — and an animated
Disney Channel Original Movie, "Phineas and Ferb: Across the 2nd
Dimension," premiering FRIDAY, AUGUST 5 on Disney Channel, SATURDAY,
AUGUST 13 on Disney XD, and also on the ABC Television Network (date TBD).
The soundtrack, "Phineas and Ferb: Across the 1st and 2nd Dimensions,"
from Walt Disney Records, will debut Tuesday, August 2, and a two-disc
"Ultimate Fan Pack" including a DVD, digital copy of the movie, eight
digital music tracks, eight deleted scenes, a bonus episode with character and
filmmaker commentary and more, will be available Tuesday, August 23. 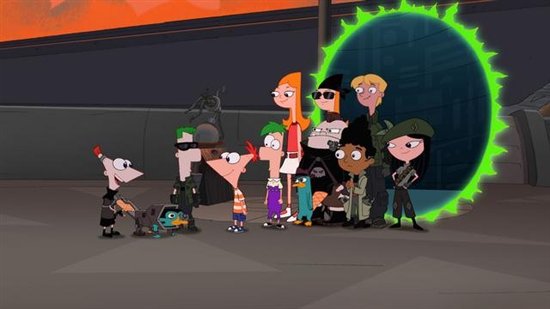 "'Phineas
and Ferb' is a super hit and we're taking it to the next level with a movie in
spectacular 2D. That's right, no fancy 3D glasses here – just the adventure of
a lifetime as Phineas and Ferb tackle a whole new dimension," said Gary
Marsh, president, Entertainment and chief creative officer, Disney Channels
Worldwide. He added, "With the 'Perry the Platy-bus On Tour' and much
more, we're looking forward to answering the perennial question, 'Where's
Perry?,' and delighting fans driving on the highways and byways this
summer."

During
"Perry the Platy-bus On Tour," fans are invited to marvel at nearly
4000 pounds of Perry (complete with a bill, tail and googly eyes), come aboard,
play the exciting new Unity 3D video game, "The Movie Game: The Dimension
of Doooom!" and video console games, sing Perry-oke and more. There is no
admission charge. The route for the "Perry the Platy-bus Tour" will
be announced soon. 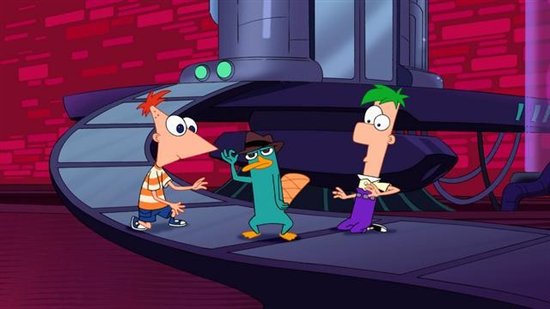 "The
Movie Game: The Dimension of Doooom!" and a "2D Yourself" activity
that allows users to create a custom avatar to explore the 2nd Dimension, among
other digital experiences, will begin rolling out on the new "Phineas and
Ferb" supersite Friday, June 17 on DisneyChannel.com and DisneyXD.com.

A
video game inspired by the movie
, "Phineas and Ferb: Across the 2nd
Dimension," for the Wii system, Nintendo DS family of handheld systems and
PlayStation 3 computer entertainment systems, will release this summer through
Disney Interactive Studios.

A
special junior novel, joke and novelty book, and an official 96-page magazine will
be available Monday, July 27 via Disney Publishing Worldwide.

Disney
Theatrical Group will introduce "Disney's Phineas and Ferb: The Best LIVE
Tour EVER!," a live touring stage show produced by Feld Entertainment that
will play in more than 80 hometowns across the country, beginning August 21 in
Lakeland, Florida.

The schedule for "Phineas and Ferb:
Across the 2nd Dimension" is:

“House of the Future” – The Plastic House in Disneyland

“The Lion King: Twenty Years on Broadway and Around the World” reveals how close this hit show came to not happening