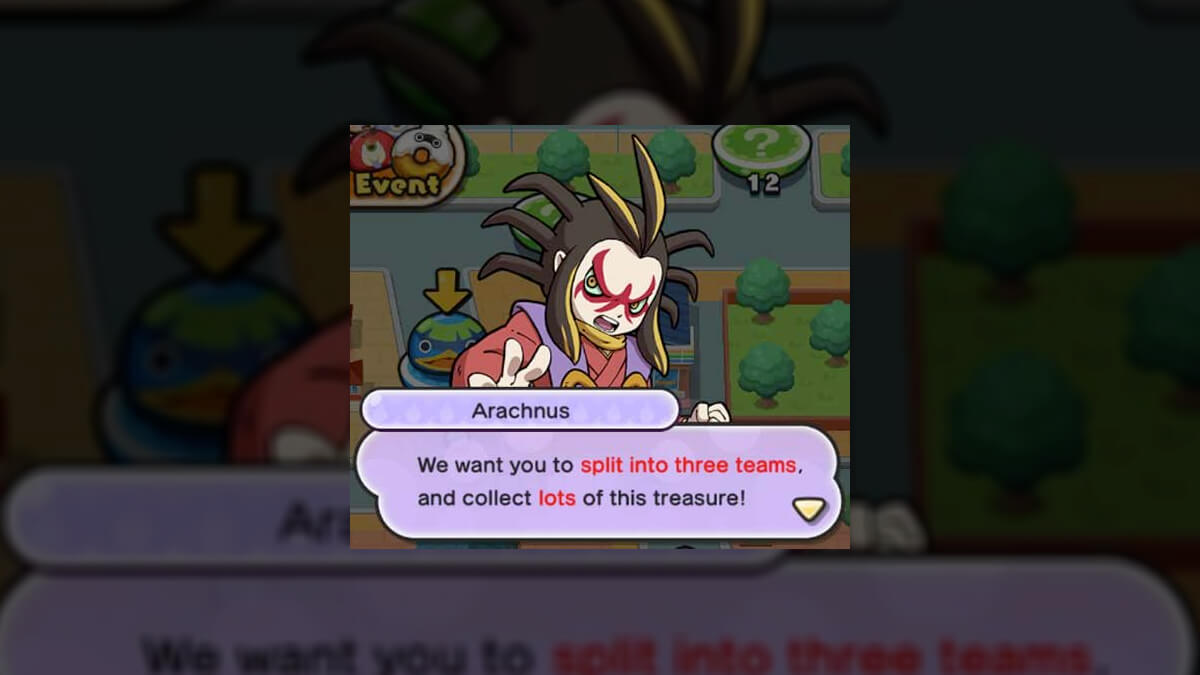 If you have a child that watches cartoons, or you enjoy watching cartoons yourself, you’re probably pretty aware of Yokai Watch. In fact, if you have any interest in entertainment in Japan, you probably have, at least, a vague idea of what Yokai Watch is- I’ve already covered the series multiple times, and have written about the game I’m about to cover, but here’s the brief version of it: There are collectible monsters you have to use a watch to find. There are hundreds of the adorable little monsters. These characters will haunt the toy aisles of Target for a very, very, very long time. And now, on your iPhone, you can play a game that very heavily resembles the Tsum-Tsum games, starring these Yokai characters! In fact, this phone game is typically used to introduce American audiences to Yokai Watch characters coming in future games. But with Yokai Watch 3 so far out, things had been stalling out some.

So it’s nice to see the game hosting a fun ‘Scramble’ event! In this event, you’re given a choice between three teams. Each led by a Yokai mascot character, with Lady Longnek for Yellow, Pallysol for Red, and Boyclops for Blue. The game sets up a series of stages, like the standard game, but you’re encouraged to chain ‘Wibwobs’ into larger ‘Wibwobs’ to break orbs that have cake in them … That turn into donuts. Don’t worry about it. Just take the donuts. As you collect donuts, you’ll rise through ranks of other players on your team and collect fun prizes for your efforts, like rare characters for the game, and in-game money! At the end of the event, depending on where you’re ranking, you get a larger prize.

It’s hard to not draw comparisons to Pokemon Go with this event. There are red, yellow, and blue teams, you fight with adorable creatures against these teams, and everyone seems to have picked the red team. Still, the game remains unique enough that it’s a pretty fun time to compete in this event. However, it’s a little hard to jump into if you’re just starting out with the game. The stage difficulty ranks up quickly, so by about four levels in, if you’re just starting out (Like I was, because I was on a new phone, oops!) you’re going to end up dying. A lot. But hey, the donuts are very, very, very cute. And while the rewards, so far, may not be the most exciting thing about this event, it’s a cute little add-on for a very solid, fun game.

“Adventure Time: Pirates of the Enchiridion” game coming this summer 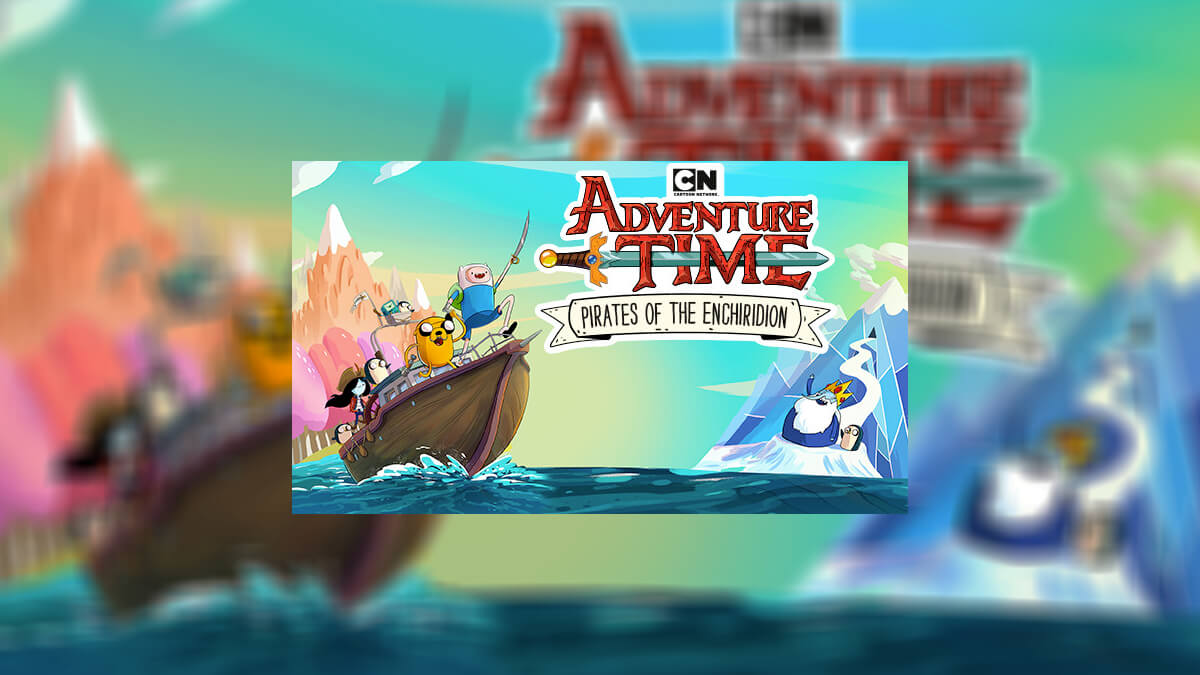 “C’mon on, grab your friends … ” A new Adventure Time game is coming out across multiple platforms.

In this open world game, Finn and Jake will be sailing on a raft (Named Jeff) through the flooded land of Ooo to solve the mystery of why water engulfed their home and to help others & get in hijinks along the way. With a ragtag gang of friends (From a vampire, to an Ice King, to a little robot) Finn and Jake will travel from the melting Ice Kingdom to the Fire Kingdom and fight in turn-based combat like an RPG. 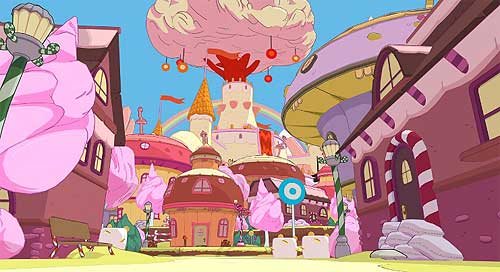 The trailer shows off some absolutely gorgeous character models and environments. I’m particularly enchanted by the gorgeous Candy Kingdom that’s briefly shown in this footage. The art design sticks close to the show, but brings with it a soft, sweet design rarely seen in adventure games. Which is a refreshing thing to bring to the table. Likewise, it’s a joy to see the characters translate to 3D so well. Outright Games has done some fantastic work here with their art design. 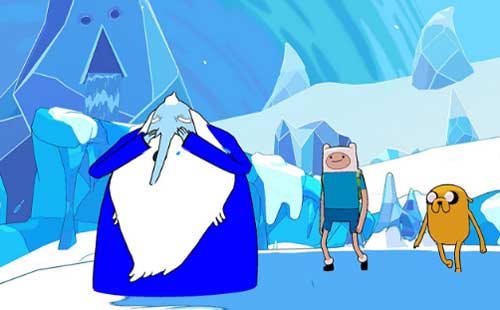 Likewise, the voice cast for the show will be reprising their roles as characters in the land of Ooo. And they’ll have a lot of lines to record. Not only can you control Finn and Jake, but you’ll be able to play as BMO and Marceline as well. You can upgrade these characters to unlock unique abilities for combat and the map holds plenty of fun mysteries too. With side stories and secret locations, this seems like a game that’ll have hours & hours of fun. 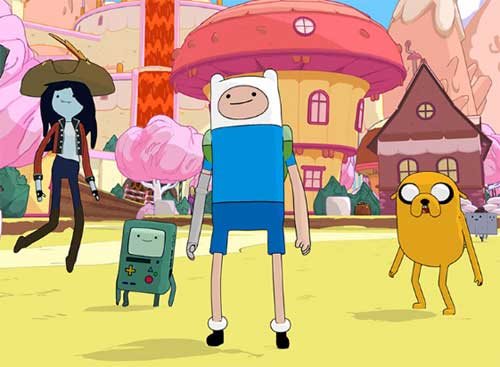 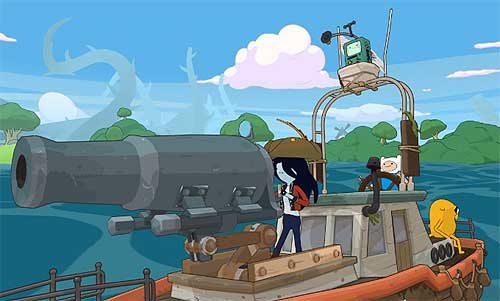 ‘Adventure Time: Pirates of the Enchiridion’ will be out July 17th for the Nintendo Switch, Xbox One, Playstation 4, and PC.

Do you like treasure hunting and/or cooking soup? Then Pokemon Quest is the game for you 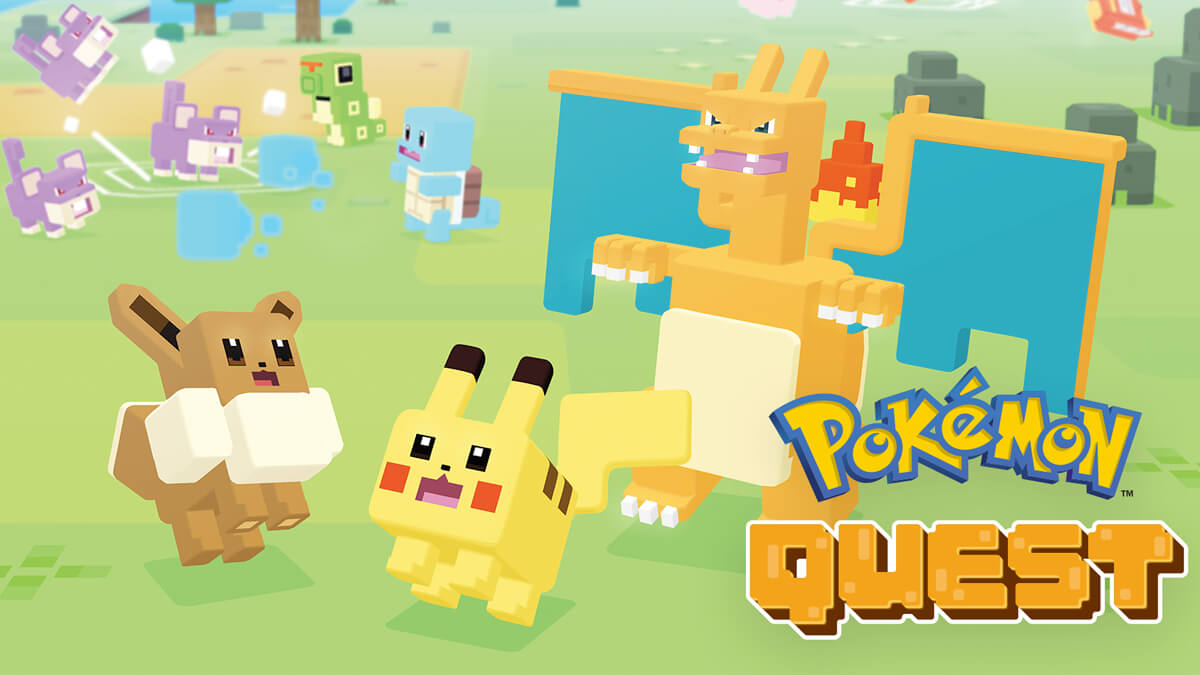 Immediately after the Pokemon press conference on May 29th, the mobile-switch cross platform game Pokemon Quest was available to download on the Nintendo eShop (with the mobile device version debuting later this month). Curious about the ‘Free-to-Start’ game, I snagged a download and started playing. 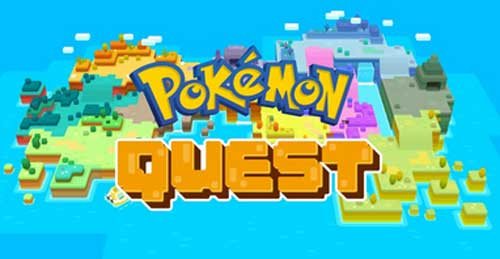 Pokemon Quest is a game that feels best letting itself auto-run. You check in several times a day to see what Pokemon have appeared at your camp (The conceit behind this game is that you’re a treasure hunter & Pokemon flock to you to fight their brethren in your honor. They also sometimes just come by because you make really good soup. What can I say?). With the Pokemon at your disposal, you build a small exploration team much in the same style as the Pokemon Mystery Dungeon game series. And you then set them out to fight other Pokemon in open levels. From these battles, you win power stones (which allow you to upgrade your Pokemon’s health & attack power), and ingredients to lure other Pokemon to your camp.

You may’ve taken notice use of the term ‘Free-to-Start’ earlier in this article. That’s because — like many mobile services — this game offers add-ons for purchase. I don’t see any age limit on the Nintendo Switch version to take away ads for purchases (which many mobile games have chosen to add. See Disney’s own ‘Disney Crossy Road’) but the Pokemon Company may be expecting parents to set their own controls over the switch with the parental controls available on the system. 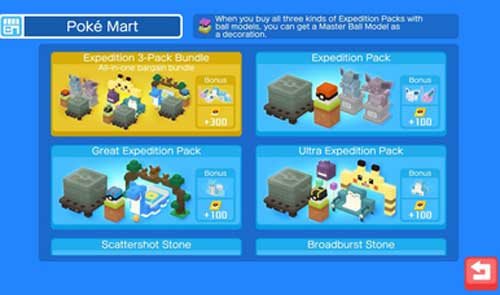 Still, the game is typical in mobile game fare for trying to wring money out of players. Energy to play the game costs P tickets, which you can earn 50 a day … or you can just buy. The game gives you an amount to start with, shows you how to use them to speed up your game, and then takes you to the shop where you can see an advertisement to buy it — along with Pokemon furniture to help your team.

These packages can go up to $30 and include Pokemon in-game items & exclusive furniture. And while Pokemon Go offered items in bundles like this, it’s still odd to see in a Pokemon game — let alone a Pokemon game on the Nintendo Switch (albeit, this is a cross-platform game). The game itself doesn’t seem to have any sort of hard-pay line for gameplay, though. I’m up to the fifth world in my game without making any purchases. And while the game difficulty has dramatically ramped up, likely to encourage purchases, it’s still completely manageable to play without paying. 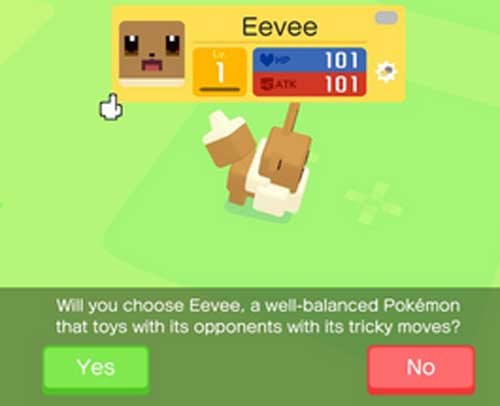 In that sense, for a free game, it’s really cute & enjoyable. The graphics are pleasing and colorful. And if you return to camp, you’ll find all the Pokemon you’ve befriended hopping around adorable decorations. Sometimes stacking on top of each other, other times following each other around in what seems like games of tag.

The ‘cooking’ mechanic to encounter a random Pokemon makes encountering them feel less like gambling and more like strategy. By cooking certain recipes from materials you find on missions, you can draw certain types of Pokemon to your camp. Cooking in certain pots (unlocked by playing through the game) can draw higher powered Pokemon at the cost of more materials. And waiting while your energy fills up means running out of ingredients (At the point of the game I’m at, about half-way through) doesn’t seem to be a problem.

All in all, I’d say, if you have access to this game, check it out and see if it’s for you. There doesn’t seem to be cross platform support for other Pokemon games. But as a standalone, it’s a cute, fun blip of a game. The hard ‘end’ of the levels within surprises me, especially since it seems to end with 150 Pokemon (out of the over eight hundred available). So I’m not sure what there is to get out of it when you get to the end level outside of getting every Pokemon. But it’s still a fun, very casual strategy game. Just keep an eye on purchases if your children decide to play. 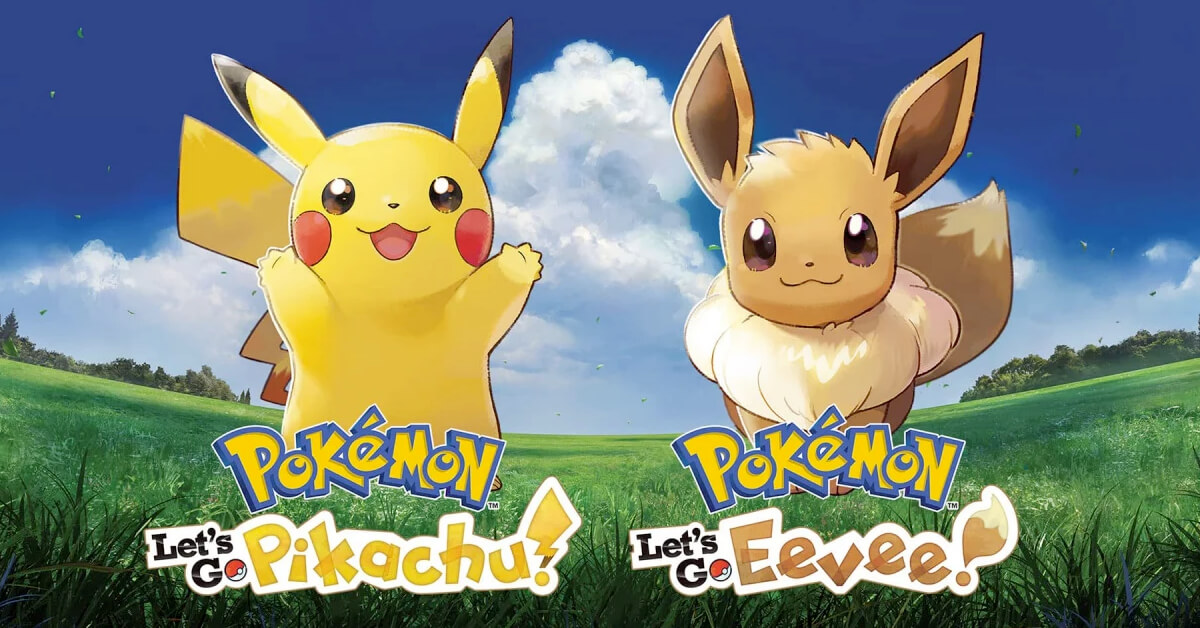 Taking inspiration from gameplay styles from the popular “Pokemon Go” for mobile devices, “Pokemon — Let’s Go, Pikachu !” and “Pokemon — Let’s Go, Eevee !’ adopts the thrown Pokeball system. By using one controller with the Switch system, you can make a tossing motion to throw a Pokeball and capture a cute critter for your team.

Additionally, you can buy the “Pokeball Plus” accessory to act as an additional “Joy-con” controller for your Switch to capture Pokemon. Then load a Pokemon into your pokeball, and take it out on the go.

From there, with the accessory, you’ll be able to interact with the Pokemon you have inside. Although current information doesn’t offer whether we’ll have more options than putting Eevee or Pikachu in the Pokeball Plus, the footage seen in the linked trailer is absolutely adorable.

The game itself seems to be a remake of Pokemon Yellow, a game released twenty years ago for the Game Boy Color. You explore the Kanto Pokemon region, and seem to be limited to the 150 Pokemon available when that game was out (Well, 151, if you were lucky, or good at exploiting glitches). But these games ditch the random encounters of mainline Pokemon games and adopt the overworld encounters of Pokemon Go. What Pokemon you see on the overworld is what you get.

Additionally, Pokemon can follow you around and you can ride some of them. In footage, we see a trainer riding a giant Onyx (i.e., a giant snake made out of rocks. Who wouldn’t be comfortable riding on that?) and followed by a starting Pokemon, Bulbasaur. Although in these two games, you start instead with the series mascot Pikachu, and the evolution Pokemon Eevee, which can evolve into several different pokemon. You can also put little outfits on them. Which is – frankly — incredible.

Likewise, this seems to have local multiplayer. Hand the left Joy-con to a friend and let them enter your game. Or if you’re feeling really lonely, put the left Joy-con in your hand and pretend you have a friend while controlling the new trainer that arrives. What a fun time!

You and your friend can then team up to capture Pokemon together, or go exploring together- And you can have Pokemon you capture in Pokemon Go (of the original 151 Pokemon) arrive in your game. You can also send “Presents” back to your Pokemon Go game, including a possible new form of Pokemon as the trailer discusses.

“Pokemon — Let’s Go, Pikachu !” and “Pokemon — Let’s Go, Eevee !” will be arriving on the Nintendo Switch this November. Likewise, a new Pokemon game will be released in the second Half of 2019. With a Mario movie in development and theme park additions on the way, it’s sure to be a busy year for Nintendo.