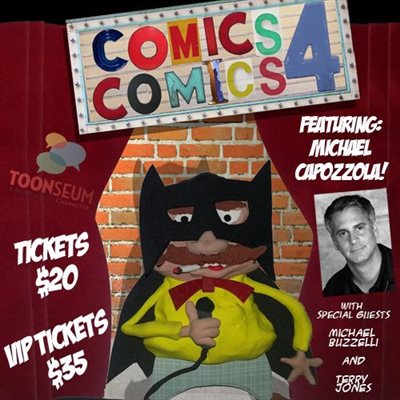 The 4th installment of this annual fundraiser brings headliner Michael Capozzola to Pittsburgh and onto to the stage at Little E's at 8pm on April 4th.

Michael Capozzola is a San Francisco-based comedian and cartoonist. He's contributed to Mad Magazine, The New York Times and National Lampoon. Michael is the producer and host of the San Francisco Cartoon Art Museum's annual Comics for Comix fundraiser which served as the inspiration for the ToonSeum's yearly event.

"We are really delighted to have all these great comedians donate their time to support the ToonSeum." said ToonSeum Marketing and Events Director Mandi Bridgeman, "It is really a special moment for us to have Michael Capozzola, the originator of Comics for Comics visiting our museum here in Pittsburgh to share his unique brand of humor."

Mike Buzzelli is a standup comedian and published author. As a comedian, he has performed all around the country, most notably, the Ice House, the Comedy Store and the Improv in Los Angeles. He has performed as a stand up in Pittsburgh as well, most notably for several local charity events such as Cabaret for a Cause, The GLSEN Awards, and Brewing Up A Cure. As a writer, Mike has published in a variety of websites, magazines and newspapers. His book, Below Average Genius, a collection of humor pieces culled from his weekly humor column at the Observer-Reporter newspaper, is on sale now at Amazon.com.

Terry Jones is a well known Pittsburgh name in the Comedy world. He is now Co-Hosting the New Top 100 Comedy Podcast on iTunes "Jim Krenn – No Restrictions" that is Worldwide on the Sideshow Network. He is Co-Hosting with Pittsburgh Native and Legend Jim Krenn. With his years of experience and array of impersonations he will sure make you double over in laughter.

The event will be preceded by a VIP reception at the ToonSeum beginning at 6:30pm. Comics for Comics will then open at Little E's directly next door to the ToonSeum at 949 Liberty Avenue.

Tickets for Comics for Comics are $20. VIP tickets which include reserved seating and the reception are $35.

All proceeds benefit the ToonSeum. A non-profit museum of comic and cartoon art.